The Surreal Serendipity of Shirley and the Skin of our Teeth

How serendipitous that after seeing Thornton Wilder’s surrealistic 1942 play, The Skin of Our Teeth,  performed brilliantly by Studio 58 at Langara College on Tuesday,  I would listen to the lead character in Gustav Deutsch’s film, Shirley, Visions of Reality, read aloud from that very play the very next evening, at a screening of the film at VanCity Theatre.

The contrast between artistic styles could not be more dramatic. The  rich cast of characters in Thorton’s play — the inventor George Antrobus, his wife, their maid Sabina, and several others, including woolly mammoths 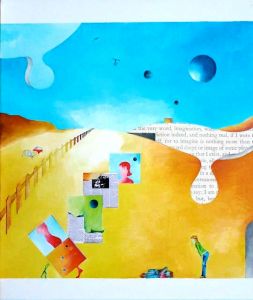 and a dinosaur — stride across and slide down the roof of the Antrobus’s sinking house, commenting about the state of the nation, natural history, and the unseasonably cold weather.  Seldom in the play does the action or dialogue slow down enough to produce anything like states of calm or serenity in the viewers, in great contrast to the experience of watching Deutsch’s Shirley, which proceeds slowly along, patiently, and minimalistically (if that’s a word) through sets that pass beautifully and meticulously for Edward Hopper paintings. One has to see Shirley to believe that Hopper’s paintings could be transposed into three-dimensional spaces with such perfection.  It is within Hopper’s “Hotel Lobby” that Shirley is seated and reading from The Skin of Our Teeth in preparation for an audition for the part of Sabina.

The snail’s pace at which Shirley moves through America’s 20th century, from within Hopper painting to another, as Shirley muses on her life, her boyfriend, privacy and society, reflects or captures the remarkable stillness, thoughtfulness, and atemporality (or sense of stationary-ness, if I could put it that way), of Hopper’s images.  Hopper was a still-life master.

By contrast, if one were to liken Wilder’s play to the style of a visual artist, it is surreal, busy like Hieronymus Bosch, and overtly self-reflective or self-conscious.  Audience members are

surprised when the maid tells them that she would prefer to deliver different lines and a director appears on stage to keep her in line.  And this is where one wonderful commonality between The Skin of our Teeth and Shirley arises. The  characters in Deutsch’s film move within paintings, each of which has the distinctive feel of a theatre set. Both pieces are consciously ‘staged’ — so, too, did Hamlet feel — and thus draw attention to space and form.

As for substance, there is an apt sense of human insignificance in Wilder’s play that is evoked in the silence and human isolation of Hopper’s paintings. Wilder’s play uncannily anticipates climate change (Atlantic City’s boardwalk is destroyed by an atypically powerful storm) and the sense that human beings will eventually join the dinosaurs as relics of natural history, despite our resilience to date. The characters are always slipping down the roof of Antrobus’s house and getting their footing again. Hopper’s paintings don’t show many human beings, but when they do, the figures are typically on level ground, alone or in modest company, and seated or standing in contemplation of the vast world outside, warmed by the sun’s rays passing indifferently by.