I have enjoyed writing since my earliest days as a philosophy student.  I have written many essays over the years, several of which have been published in law journals (see Non-Fiction).

Though I was never a big crime novel reader before attending law school, a forensics course there inspired me to try my hand at the genre.  Having discovered that cheiloscopy was the science of identifying lip prints, I penned If Lips Could Kill (A Cartesian Crime Story) (1993).  Perhaps I’ll always remain intrigued by René Descartes’ Meditations and Discourse on Method, for years later I wrote another crime novel nodding to the thinker, entitled Discourse on Murder (2004).  In between those projects and while in England I wrote another mystery imagined from my brief experience as a criminal lawyer.  That one is entitled Undercover in the Maritimes (2003).  All of these stories are held together by very large butterfly clips in a cardboard box.  If anyone is interested, I might find the courage to post them, but not without applying a new coat of paint to them first.

After 2003, when Vancouver won the bid to hold the 2010 Winter Games, I watched the city turn itself upside down to become the quintessential host.  I wrote a spoof of those years, imagining what the original Olympians (from Mount Olympus) might think, and injecting a dark mystery about missing children.  I entitled it To See the Sky (Granville Island Publishing 2008).  Daunting trademark rules that developed while I was writing that book – you couldn’t publish “Vancouver 2010” for commercial gain, for example – led me to alter the city and proper names, which incidentally enhanced the allegorical feel of the novel. 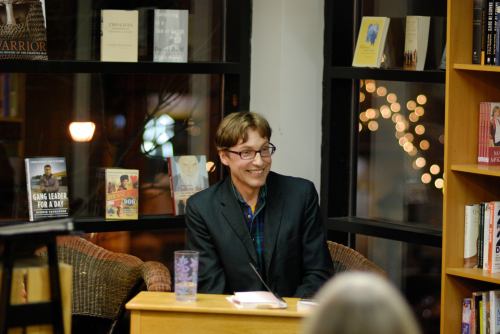 Christopher Nowlin reads from 'To See The Sky' in Calgary, AB, 2008

I have since completed another murder mystery, set at the beginning of the 2007/2008 global recession, and am currently working on a new novel.

Click the links below for details of Chris’ publications.